The Okanogan-Wenatchee National Forest encompasses more than 3.8-million acres in Washington state and stretches north to south from the Canadian border to the Goat Rocks Wilderness - a distance of about 180 miles. The forest lies east of the Cascade Crest, which defines its western boundary. The eastern edge of the forest extends into the Okanogan highlands west of the Okanogan River, then south along the Columbia River, and then to the Yakima River valley. Because of this wide geographic range, the forest is very diverse - from the high, glaciated alpine peaks along the Cascade Crest and the numerous mountain ranges extending eastward from the crest, through deep, lush valleys of old growth forest, to the dry and rugged shrub-steppe country at its eastern edge. Elevations range from below 1,000 ft. to over 9,000 ft. Precipitation varies widely - from more than 70-inches along the crest to less than 10-inches at its eastern edge. This of course greatly affects the forest and vegetation types across the area. 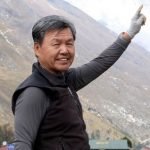