The wild lands of the San Bernardino and San Jacinto Mountain Ranges were designated a National Forest more than a hundred years ago.

Originally, the forest was home to Native Americans, since long before recorded history. Mexican and European settlements occurred sporadically for the first half of the 19th century, but the chain of events that led to the creation of the National Forest in 1893 really began after California became part of the United States in 1848 (it had been part of Mexico since 1822).

In 1855, gold was discovered in the San Bernardino mountains. Over the second half of the 19th century, mining, timber, and grazing grew quickly, taking a heavy toll on the land. By the end of the 19th century, significant sectors of the forest had been felled and overgrazed. Streams and rivers were silting in and water quality was declining. Meanwhile a growing population and a thriving citrus industry made increasing demands for clean drinking and irrigation water.

A pioneering populace, who had conquered what seemed like an endless frontier, began to realize that it now must manage the land much more thoughtfully.

A Board of Forestry report in 1886 found that "the necessity of the hour is an intelligent supervision of the forest and brush lands of California, with a view to their preservation."

The San Bernardino National Forest is comprised of several departments and three Ranger Districts. Our Forest has Fire, Police, Planning and Permits, Recreation, and a Roads department just like a city, county or state government. In addition we have a scientific arm, that deals with issues relating to cultural, water, soil, wildlife, plants and trees. 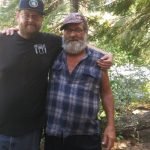